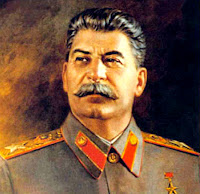 "JOSEF STALIN: Christian Who Manipulated Jews"
By Thomas Keyes
Apr. 7, 2005
Many times in history, you read that in a predominantly Christian society, a handful of highly intelligent and crafty Jews has gotten control of a vast number of Christians, and that this is the sort of thing that has led to the repeated expulsions that Jews have experienced. This phenomenon has been recorded in Spain, Germany, Russia, Austria-Hungary and elsewhere. It is almost as if Jews float on water, whether it's a lagoon or an ocean, but are eventually tossed ashore by a big wave.

But there was one time in recent history when a Christian put himself in charge of a society of Jews. That one Christian was Joseb Dzhugashvili, better known by his alias, Josef Stalin, the man who ruled the Communist Party and the USSR with an iron fist.

Perhaps these aliases were assumed because originally these men formed an underground. Perhaps they sought also to conceal their Jewishness from the anti-Semitic element among the proletariat they claimed to be championing.

I noted in an article that I posted here recently entitled, "Jews: Figuring the Odds," that in a photograph of 61 leaders of the early Communist party, 22 Jews were included, and since Jews made up only 2.5% of Russia's population at the time, the odds against such a landslide's having occurred in a random selection would have been 21 quintillion to 1. This proves beyond the shadow of a doubt that certain Jews automatically rise to the top.

But Josef Stalin was not a Jew at all. Nor was he a Russian. He was a Georgian from a Christian family. Georgians are the largest group of 60 or 70 that make up the Caucasian ethnicity, not to be confused with the Caucasian race. The Georgians, also called Kartvelians, and their relatives, Lezghians, Abkhazians, Chechens, Ingushes, Kabardians, Mingrelians, Circassians and others, inhabit the Caucasus, between the Black and Caspian Seas. These people are completely unrelated to ethnic Russians, Armenians and Azerbaijanians (or Azeris) that live in the vicinity. Nor are the Georgians Jewish.

­Stalin was brought up in the Georgian Orthodox Church, one of the oldest of Christian churches. He aspired to be a priest, probably to please his mother, who sought this vocation for him, and, at the age of 15, he won a scholarship to a seminary in Tbilisi (or Tiflis), the capital of Georgia. He excelled in singing and sang a solo in the local church on the occasion of Tsar Alexander III's birthday. Later he was expelled from seminary for absenteeism.

I'm pretty sure that it can be substantiated statistically that a higher proportion of Jews than Christians become atheists. At any rate, one of the planks in the Communist Party's platform was atheism. This derived from the atheism of Karl Marx, another Jew. So Stalin, upon entering the party, if he had ambitions to rise within, would have had to confess atheism as a first step to being credentialed as a Communist. But whether Stalin really embraced atheism or persisted in his predilection for Christianity is a question that only Stalin could have answered.

However that may be, it does remain that the teachings of Christianity did nothing to prevent him from perpetrating the incredible monstrosities synonymous with his name. If the word of Christ had had such a redeeming quality as Christ's devotees like to pretend, Stalin would probably never have become what he was.

Anyway, with the death of Lenin, who probably preferred Trotsky to Stalin, a real power struggle ensued, with once-Christian Stalin winning out over Jewish Trotsky and his coreligionists. So one time and maybe one time only, a Christian manipulated Jews, instead of vice versa, as Stalin went on to control the party and the country for 30 years.
P.S. A Note from Jordan: If you're further interested in learning about the horrific man that was Josef Stalin and how he murdered a total 20 million people across the span of his evil dictatorship, you may find this short documentary rather intriguing: