Deaf People with the opportunity to hear should take it in a heartbeat! 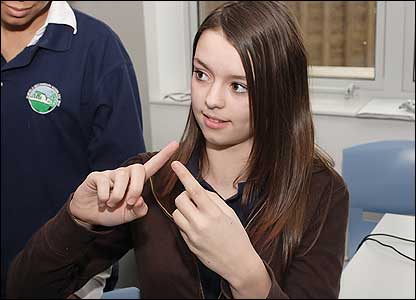 Believe it or not, many deaf people eligible for some form of hearing aid, implant, or surgery which would allow them to hear opt against it. Accordingly, they feel complacent in their own world of silence in which they've spent their whole lives adjusted in. They view the outside world as having underestimated and looked down upon them all their lives solely due to their deafness. In spite of the blatant doubt that society felt for them and the rest of deaf people, they are able to live self-sufficient, socially-integrated (at least within their own infrastructured communities, anyway) lives. Although they cannot hear they effectively have been using sign language to communicate just as long as hearing individuals have been using vocal speech to communicate. They've learned to read lips with some proficiency, therefore becoming more adept to communicating with the hearing world, and perhaps through much hard work have even acquired the ability to speak (if only to a limited degree).

And yet not one deaf individual will ever truly be able to understand just how greatly disadvantaged they really are - unless, of course, they someday hear.

I strongly advocate any deaf person with the opportunity to hear (even if only a bit) seizing the chance as a true miracle. Yes, the methods by which deaf people can now ably supplement and live functioning lives are extraordinary. However, none ever can grant a deaf individual the ability to walk up to a given hearing person and easily start up some small talk in the typical, carefree way that is of course taken for granted by most. Nothing can actually allow them to experience music the way it was meant to - by listening, not by feeling whatever vibrations consequent from its playing. And no matter what, deaf people must utilize a sparingly smaller amount of harder-to-discover outside environments - whether that be in the context of work, socializing, or even just tedious errand-running - which are intentionally made friendly to their "supplemented" inability to hear as does everyman. The daily tasks that hearing individuals meet in everyday life, a normal day's molehills, are the mountains which the deaf are forced to perseveringly climb nonstop, whether that be in finding employment, in searching for a place of worship specially for the hearing-impaired (which - particularly for deaf individuals whose religion is not that of the majority's - can be sparingly rare), or otherwise.

It is simply unarguable: The life that the deaf American leads is much tougher by default than that of the hearing one.

Now, none of this is to disregard the tribulation of the no-longer-deaf person as they learn the difference between a good sound and a bad sound, between important ones and unimportant ones as they strive to recognize the basic rhythm of sounds in everyday life. Each day no less overwhelming, the new hearer very necessarily would have to constantly attempt to well-familiarize oneself with the countless many sounds fitted into the different aspects of life. But before such struggles can even BEGIN to be acknowledged, it is not to be forgotten that such repercussions of transitioning into the hearing world are not only totally expected - they're technically but the most desirable outcomes following being truly cured of one's deafness! Why but to gain the experience of hearing, of knowing how great their disadvantage really was and why as a cured individual that disadvantage has greatly shrunk.

So yes, certainly there is the undoubtable strife of adjustment to face, but again, it could not be emphasized enough that this was explained in great detail to them beforehand, and that knowingly - bravely - the miraculous procedure was avidly prepared for. And, most important of all, the end will by far justify the difficult means as they increasingly enjoy the ability to communicate with the overwhelming majority of people, by speaking and hearing at last. In sum, all the previously noted burdens of everyday deaf life which altogether form that daunting mountain soon enough begins to speedily dissipate. With time to adjust, patience, hard work, and an elated learning process, that frightening, mysterious procedure that allowed them to hear is easily redefined for the new hearer as the very miracle that went on to extraordinarily better their life forever.

And that, I think, says it all, my skeptics and supporters alike.